GHANA AT A GLANCE

Named after the medieval Ghana Empire of West Africa, but actually known as the Wagadugu, the old Ghana was five hundred (500) miles west of the present Ghana. The empire was controlled by Sundiata in 1240 AD. The name Ghana was actually the title of Kings who ruled the Kingdom. It later became the Gold Coast due to the mining of gold. The current Ghana is located along the Gulf of Guinea and Atlantic Ocean in the Subregion of West Africa. Ghana, formerly known as Gold Coast, was colonized by the British.
Before independence, Ghana was governed by the Queen of England, Queen Elizabeth the second. Other Governors like Charles Noble Arden –Clarke and Lord Listowell also governed the land. In the year 1957, Ghana gained independence and for the first time a Ghanaian was made the prime minister due to his efforts in gaining independence. Later in 1960, Osagyefo Dr. Kwame Nkrumah, the prime minister, was made a president. His tenure of office ended in 1966 as Major General Joseph Arthur came to power under the military rule. He ruled under military power from 1966-1967. After him people like Akwasi Amankwa Afrifa, Edward Akuffo-Addo, Colonel Ignatius Kutu Acheampong, Lieutenant-General Frederick Willian K.Akuffo and Dr. Hilla Limann became presidents majorly through coups. Flight Lieutenant Jerry John Rawlings came to power after which John Agyekum Kuffour and John Evans Atta-Mills. The president who was in power before the current president of Ghana was John Dramani Mahama. Currently the president of Ghana is His Excellency Nana Addo Dankwa Akuffo-Addo.

Ghana is a multi-lingual nation just like most countries in Africa. With English being the country’s official language used in government, business, media, education, legal affairs and official documents, Ghana holds this heritage as a result of who colonized her.

According to Worldreader, the national average for literacy in Ghana is 58%. This implies that, more than four out of every ten Ghanaians cannot read in any language. The Upper East and West Regions have the highest rates of illiteracy as well as the Northern Region. For the Eastern and Volta Regions, two-thirds of the population are literate. The rate of literacy in the Western Region is higher than the Northern Regions just that the gender divide is badly felt there. Males are more likely to be literate than females. Most people in the Brong-Ahafo and Ashanti Regions are not literate in English. The Central and Greater- Accra Regions have the highest literacy rates in the country. As at 2015, adult illiteracy for Ghana was 3.93 million though in 2000 it was 4.62 million. 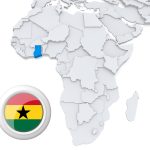 HOW TO GET WHERE YOU WANT TO GO IN GHANA